Posted on January 2, 2015 Posted By: adminCategories: In the News 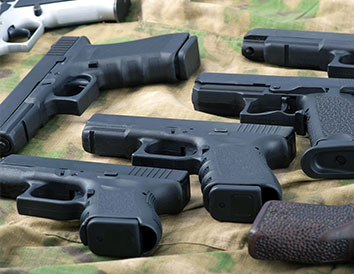 2014 was not yet three hours old when Erie police were summoned to an eastside tavern on a report of a fight and found one man shot in the buttocks and another man shot in the calf.

The Jan. 1, 2014, shooting, which led to criminal charges against Adrian C. Coleman, 34, who faces trial later this month, would be followed by many more in 2014.

Ten people were killed by bullets, double the number of people fatally shot in 2013.

Erie police officers responded to 453 reports of shots fired, through Tuesday, and determined that 375 were legitimate incidents. It was more than twice the number of confirmed shots-fired calls in 2013.

Gun violence in Erie, which has steadily increased over the past several years, continues to alarm and anger community members and frustrate those who investigate it.

But those leading the charge to combat the violence say progress is being made, and they cite a growing recognition by the greater community of the gun problem plaguing Erie and more people who are stepping forward to help stop it.

“From my perspective, it’s clearly not all a police problem,” Police Chief Randy Bowers said. “Despite the numbers of calls involving guns and shots fired, our police department continues to do a great job investigating and prosecuting whenever we can. We have a dedicated department. We are very busy, and we’re keeping up.”

Bowers said “everyone knows” the problem is young men who don’t know how to deal with disputes other than violence. It’s a “cultural problem” police have tried to address through different approaches, he said.

Bowers and Erie Mayor Joe Sinnott in May announced the launching of a series of police initiatives aimed at getting extra patrols on the street to combat the rash of shootings. They included tapping early into a federal grant to pay for additional patrols in the East Bayfront neighborhood, and sending two of its specialized patrol units out into neighborhoods plagued by gun incidents.

He said that the number of guns taken off the street by officers has increased this year — 174 were recovered in 2014, through Tuesday, compared with 108 in all of 2013. The city also has seen a significant drop in the number of armed robberies involving guns, as there were 67 reported through Tuesday compared with 119 in 2013, according to Erie police and the Pennsylvania Uniform Crime Reporting System.

Bowers said he and Sinnott have constant discussions about gun violence in Erie, and they will continue to discuss ways they believe the police bureau can be more effective in dealing with it.

“We’re not the only city facing this problem. That doesn’t make it OK, but we will continue to look at changing strategies as we move forward into 2015,”

“We’re not the only city facing this problem. That doesn’t make it OK, but we will continue to look at changing strategies as we move forward into 2015,” he said. “We feel the community is very supportive of police in Erie. We want to take that positive situation we have in Erie and build on it and try to continue to address the problem.”

An anti-crime program known as Unified Erie was launched three years ago under the direction of organizers who include Erie County District Attorney Jack Daneri and Assistant U.S. Attorney Marshall Piccinini. It features a three-pronged approach of crime prevention, enforcement and the re-entry of prison inmates into the community.

Piccinini said he doesn’t see the growing number of gun violence incidents as being reflective on how sound the strategies are.

“You assess success over the long-term,” he said. “There is some really excellent work being done from the community’s perspective to really take serious the notion of strengthening neighborhoods and strengthening families and connecting people to one another to help prevent a turn to problem behaviors.”

Piccinini said through the work of Unified Erie, Erie Together and the United Way of Erie County, there are some “really big steps” being taken on the re-entry initiative. He also credits Erie police for doing “an outstanding job” at being more proactive and reacting to and solving as best they can the number of shooting incidents.

With that said, everyone recognizes that there continues to be an issue with gun violence, which appears to be “small pockets” engaging in the violence, Piccinini said.

“We’re actually seeing more people outside law enforcement recognizing and being honest and forthright about that being an issue,” he said. “There are some communities unwilling to talk about that. It seems to me, in Erie, that members of the community recognize this as a problem.”

Daneri said officials are seeing increased support for the anti-violence efforts from areas of the community considered “vital,” including local clergy, business owners and social service agencies, as well as the neighborhood watch groups. An example of that “unified approach” was the creation earlier this year of the Neighborhood Resource Organization, a part of Unified Erie designed to empower neighborhoods and provide them with resources as they look to improve the quality of life of their residents, he said.

The efforts of the NRO included a free gun lock distribution program that was launched in Erie in November. The 400 available gun locks were gone within a few days.

Daneri also noted the success of the Gun Crime Working Group, which is also part of Unified Erie, in seizing guns, identifying people with guns and determining where the guns came from and if they are connected to other crimes.

“We will continue to expand the NRO and continue to broadcast the approach of Unified Erie, which is more about changing the mindset of people in the community than hoping for an immediate result,” Daneri said. “This is a long-term program. So while the increase in violence isn’t something we brush off, we also have to take it in the context of changing community attitudes toward cooperating with law enforcement and coming together in a single effort. It takes time.”

TIM HAHN can be reached at 870-1731 or on Twitter at twitter.com/ETNhahn