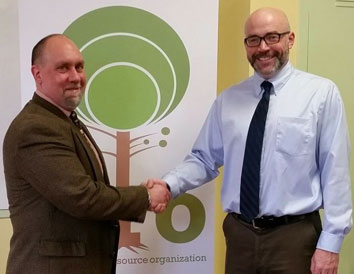 Since he helped found the Academy Neighborhood Association in 2012, Bob Hand has been looking for ways to fund its initiatives. Hand is getting a boost from the Neighborhood Resource Organization.

The Academy Neighborhood Association is the first recipient of a $1,000 grant from the NRO.

Hand said the association will use the money to buy landscaping tools to care for Baker’s Field, at East 32nd and Holland streets; to buy T-shirts and undertake other projects to increase publicity; and to buy more chairs for the group’s monthly meetings.

Hand said the association also wants to put planters, painted with its name, along State Street and other areas in its neighborhood, which encompasses about 700 homes between State Street and Old French Road, East 27th and East 33rd and 34th streets.

“As a new operation, all these little things are starting to add up,” Hand said. “This really helps us out a lot.”

The executive director of the nonprofit NRO, Dave Deter, announced the grant Thursday at a news conference where the NRO also displayed its new office, at the former St. John the Baptist School, 509 E. 27th St.

The NRO, part of the Unified Erie anti-violence initiative, is distributing the $1,000 “mini grants” from a $15,000 grant the NRO received from the Pennsylvania Commission on Crime and Delinquency. The grants, for which groups must apply, are meant to strengthen neighborhood organizations and help reduce crime. The NRO on Thursday also unveiled a new logo, which portrays a well-rooted tree. A sophomore at the Perseus House Charter School of Excellence Skills Center, JaZiya Williams, 15, designed the logo.