Posted on May 4, 2015 Posted By: Jenny PoffCategories: In the News 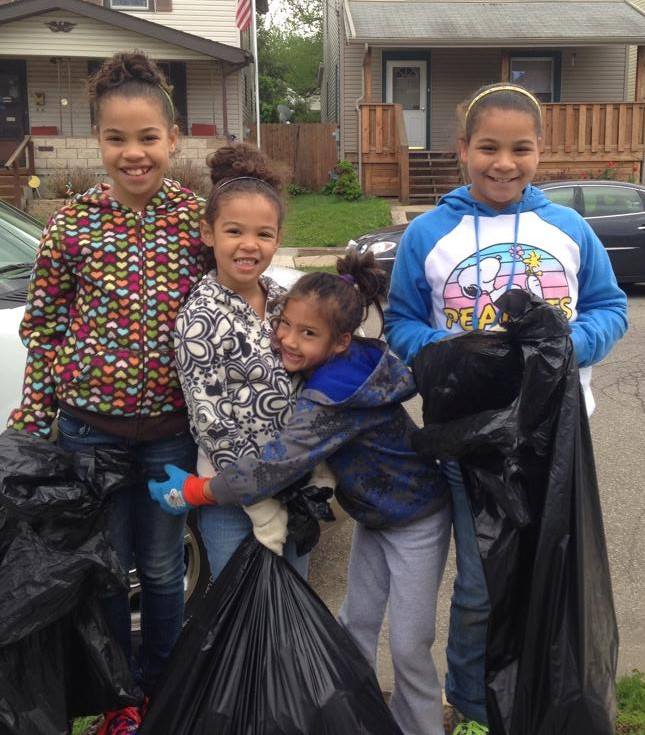 Over the weekend, a $1,000 grant spurred creation of a temporary marker at East 14th and Reed streets.

The 40 tires piled curbside signaled the neighborhood’s attempt to combat crime with cleanliness.

They used the $1,000 grant to get rid of the tires and to rent two dumpsters: one for household trash and the other for old TV sets and other electronics that can be recycled.

Tires and electronics are excluded from the city of Erie’s monthlong annual Single Large Item Collection, which ended May 7, though the city held a one-day drop-off for those items.

Saturday’s event gave Snoops another chance to get stubborn junk cleared from the residences, streets and alleys of the 3,300-person neighborhood. Two city code enforcement officers, Anthony Maggio and Steve Yurkewicz, were among the volunteers.

“There are many studies that show trash and debris really set the environment for crime to occur,” said Sue Moyer, who manages programs for Snoops, which encompasses the area between French and Wayne streets and East 12th and East 15th streets.

“So if you have a clean environment,” Moyer said, “people tend to behave.”

Other local neighborhood watch groups are launching projects similar to Snoops’ cleanup. Those groups also will use $1,000 grants.

Distributing the money — $15,000, or 15 grants — is the Neighborhood Resource Organization, a nonprofit formed a year ago to assist neighborhood groups countywide as part of the Unified Erie anti-violence initiative.

The NRO got the overall $15,000 grant from the Pennsylvania Commission on Crime and Delinquency. The $1,000 grants, for which groups must apply, are to strengthen neighborhood watch groups and other neighborhood organizations and reduce crime.

The NRO in April awarded its inaugural $1,000 grant, to the Academy Neighborhood Association. Its president, Bob Hand, said the association is using the money to, among other things, buy landscaping tools to spruce up Baker’s Field, at East 32nd and Holland streets, and to put planters along upper State Street.

With the Academy Neighborhood Association on its way, the NRO has entered its busy season of awarding grants, the NRO’s executive director, Dave Deter, said.

He said the NRO has given $1,000 each to the Snoops and three other organizations, and throughout the year will award the 10 other one-time grants. The NRO, he said, can also help neighborhood groups get larger grants from other sources for more extensive projects.

The program of $1,000 grants “is part of our larger goal for building capacity of neighborhood groups,” Deter said.

“We hope it will be an incubator. Once they get these programs under their belts, they can undertake larger projects.”

The other recipients of the newly awarded grants are the neighborhood watch group for the area of East and Hess avenues; the group representing Garden Court, the 27-house, one-block neighborhood between Cherry and Poplar streets and West Sixth and Seventh streets; and the Bayfront Eastside Task Force, on the lower east side.

Each group also intends to use the grants for beautification projects, Deter said. They include installing wooden benches and trash cans around East and Hess avenues; a cleanup day, with a dumpster and tire collection, planned for Garden Court; and adding picnic tables, trash cans and a bird feeder to a vacant lot at East Third and Parade streets.

Garden Court would have been unable to pay for a cleanup day without the $1,000 grant, said Mark Alexa, president of the homeowners’ association for Garden Court. He said the event will be open to residents outside Garden Court but still in the neighborhood.

“We want to be a neighborhood resource,” Alexa said. “If you get to know your neighbors, it gets to be a better community. We are trying to promote a community vibe in the center city.”

Across town, at East 14th and Reed streets, Sue Moyer hopes the removal of the junk and the 40 tires encourages long-lasting changes.

The $1,000 was well spent, she said, because it was part of the Snoops Neighborhood Watch Association’s “larger effort to improve the appearance of the neighborhood. It was absolutely successful.”